Foreign Capital: is Poland an economy of a subcontractor? 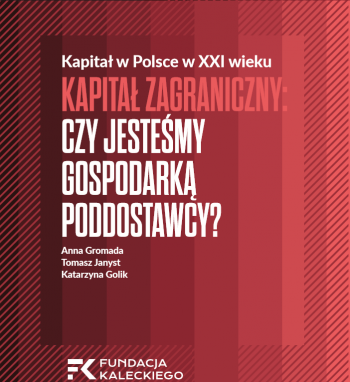 Poland displays characteristics of a dependent market economy, such as low labour costs and low added-value of output. After the political transition of 1989, foreign direct investments were seen as an opportunity for the transfer of innovation and the creation of new jobs. Insofar as quantitatively these targets have been achieved, their qualitative aspects remain questionable in relation to their impact on Poland’s long-term economic development:

• The share of public expenditure on research and development in relation to GDP is very low, at 0.9% in 2013, compared to the EU average of 2%;

• In 2014, the wage share at 46% of Poland’s GDP made for the second-lowest figure in the European Union. Not only is this indicator 10 percentage points lower than the EU-average but it also trends downward despite growing domestic productivity and in contrast to the stable European drift; Enterprises with foreign capital benefit from state aid but effectively pay less tax than their domestic counterparts:

• In Poland’s 14 Special Economic Zones (SSE) only 19.6% of entities are Polish investors; • Total tax exemption for enterprises operating in SSEs between 1998 and 2013 amounted to PLN 14.6 bln;

• In 2013, the effective tax rate of enterprises with foreign capital was 1.2 percentage point lower than that of domestic enterprises; Poland, similarly to other Visegrad countries, shows some features of an “economy of a subcontractor”, mainly in relation to Germany:

• 25% of Polish export goes to Germany; • Business cycles of Polish and German economies have been vastly synchronised for a decade now; • Poland’s export contributes relatively low added-value to the German supply-chain.